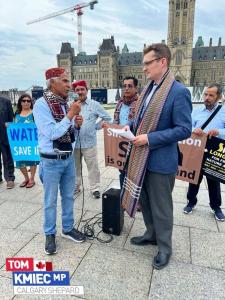 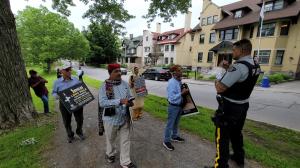 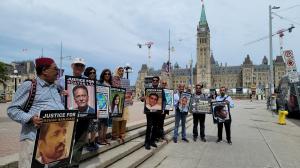 Next Plans of Action: Hunger Strike outside UN in September 2022 and Walk from British Parliament to France Parliament in 2023

This walk brings awareness of minority issues in Pakistan. It was an honour to address, meet and greet with them and give my support to their cause.”

OTTAWA, ONTARIO, CANADA, June 17, 2022 /EINPresswire.com/ — Ottawa-Freedom Walk for Sindh’s human rights, climate change, environment justice, and love for nature reached its final destination with winning support and solidarity of Canadian public and representative Tom Kmiec.
Holding the protest rally in front of the Pakistani high commission and delivering letter to the Prime Minister Justin Trudeau. The Freedom Walk for Sindh that began from Toronto and culminated at the Capital Ottawa covering 424 miles from May 28th to June 15th.The March has been the initiative of Washington based ‘Sindhi Foundation’ that campaigns for the human rights of the people from Sindh province of present Pakistan.
On culmination of the Freedom Walk for Sindh, Sufi Munawar Laghari, the Chief Executive of the Sindhi Foundation said, “the Walk for Sindh has now global significance and their next destination will be the walk from British Parliament, the Parliament of the United Kingdom in London to the French Parliament- Parliament France at Paris, next year.” He has urged the public, politicians, and parliaments of the democracies in the world, especially European Union, North America, to come forward to persuade Pakistan’s government to stop human rights abuses to the people of Sindh.
Chalking out his next plans of action for Sindh’s human rights, Sufi Laghari, declares that he was going to sit on a hunger strike in front the United Nations Head Quarters Building on 77th General Assembly session commencing from September 13, 2022, in New York.

However, MP Tom Kmiec who has been demonstrating his solidarity with Sindhi community in Canada and people of Sindh for their human rights in Sindh, visited the site of the rally of the walkers for Sindh and said he recognized the agonies of Sindhi people whose minority, girls, are forcibly converted in this case to Islam, and political dissident youths have enforcedly disappeared. MP Tom Kmiec extended his support to the Sindhi communities in Canada and people of Sindh.

The participants of Freedom Walk for Sindh thronged across the Pakistani High Commission to register their protest and to handover a memorandum against human rights abuses of Sindhis to High Commission senior official, but no one showed up to respond to the grave concerns and protest on the human rights situation in their own country.

Among the walkers, who braved a harsh summer and arduous terrain of 424 miles with their feet swollen and blistered in the process was, a woman human rights activist, Sindhi British Razia Sultana Junejo, who came all the way from London to Toronto and joined the Freedom walk Sindh. ‘It is unprecedented. It is historic. And it reconfirms that quest and campaign for the human and environmental rights of Sindhis isn’t confined to any peculiar territory or borders. It is global’ says a member of Sindhi Diaspora and political community.

‘We are here to spread the message of love for nature, concerns for climate change, and gross human rights violation of Sindhi people. So we have artists, intellectuals, musicians and human rights activists marching along 424 miles on foot,’said Sufi Munawar Laghari.

“I have written and delivered a letter to the PM Justin Trudeau apprising him of our sons and daughters and waters of the river Indus taken away by Pakistani government and military establishment. Our best minds as Professor Notan Lal are languishing in jails on Blasphemy charges”.