Retreat to Help Men Cope with the Death of Fallen Firefighters 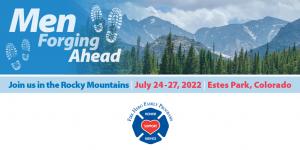 Free, inaugural event to help men move forward through the loss of a loved one

ESTES PARK, CO, UNITED STATES, July 25, 2022 /EINPresswire.com/ — For men, sadness can be a complex emotion to navigate. Often, men feel they must handle their emotions alone, or they will show signs of weakness. The National Fallen Firefighter Foundation (NFFF) assists families who have experienced the death of a firefighter in the line of duty. The first Men’s Retreat is an all-expenses-paid event designed to help men gain knowledge and skills to understand and deal with grief while building support as they move forward.

Participants have an opportunity to meet men from across the country who have experienced the death of a firefighter spouse, life partner, parent/step parent, child/step child, or sibling/step sibling. One of the important elements of this event is to bring men together who have experienced a similar loss, to share their stories, and create networks of support.

Monday’s activity will include fly-fishing. For some men, it will be their first time. On Tuesday, the men will participate in a service project, building benches and refurbishing an area for the upcoming dedication of the Fallen Aviation Firefighters Memorial in August.

Father of Kendall J. Murphy (27), a firefighter with the Montgomery Volunteer Fire Department.

Kendall was killed in the line of duty November 10, 2017, when he answered a call involving an accident less than a mile from his house. As Kendall exited his personal vehicle, another responding firefighter drove up to the scene and hit Kendall, killing him instantly. Read more about Kendall HERE.

Dwayne Murphy is a City of Washington Fire Department Captain and Assistant Chief at the Montgomery Volunteer Fire Department. Four and a half years after Kendall’s death, Dwayne says he is still trying to “find his new normal.” When Covid-19 hit, he started attending Zoom meetings with other survivors of firefighters killed in the line of duty. As a firefighter, he is still dealing with the “guilt” that somehow, he was responsible for Kendall’s death by encouraging him to become a firefighter. Often while sleeping, he would wake up at 10 PM, the time of his son’s death. Dwayne realized he needed to talk with other men and believed the support group was essential because he could hear Kendall’s name. Kendall was his best friend.

Father of Brian Dennis Neville (32), a firefighter/paramedic with the Baltimore County Fire Department.

Brian Dennis Neville began his fire career at age 16 as a volunteer with the Howard County, Maryland, fire department. He was also a part-time advanced life-support (ALS) specialist with the Harford County Volunteer Fire EMS Foundation and one of the first medics hired into the system. The night he died‚ Brian was servin as a district EMS lieutenant at Station 17 in Texas‚ Maryland. He suffered a sudden cardiac arrest while working the night shift on October 16, 2008. Read more about Brian HERE.

His father, Dennis Neville, made it clear that he was not just a paramedic–he was a firefighter paramedic. Brian’s great uncle was a firefighter; his grandfather was a doctor. Dennis says that Brian had a unique ability to diagnose a patient before test results came back. It was an important skill he brought to his job each day. He died in his sleep doing what he loved. Dennis knows it is difficult for men to share their experiences and believes the retreat will bring healing and companionship opportunities.

Edward N. Steffy‚ 71 years old‚ from Rothsville‚ Pennsylvania‚ died on November 10‚ 2011‚ in the line of duty while serving as a fire police officer. At the scene of a motor vehicle collision‚ Mr. Steffy felt ill. He sat in his vehicle‚ where he suffered a massive cardiac event and succumbed despite resuscitation efforts of medical personnel. Read more about Edward HERE.

Nevin Steffy, a 911 dispatcher, is five years older than his brother, Mark. He often remembers hanging out with his brother at Edward’s firehouse. After his father died, the National Fallen Firefighter Foundation helped Nevin deal with the raw emotion of being a male survivor. Nevin says he lost his dad but found a unique group of real friends.

Mark Steffy is a volunteer firefighter with the same unit as his father. At 12 years old, he became a junior firefighter, then a full volunteer when he turned 18. Through the men’s retreat, he looks forward to mentoring–and being mentored–by men from a diverse set of perspectives: fathers, sons, and brothers, step-brothers, life partners. Most importantly, Mark says he is a survivor.

Eric Nagle joined the Foundation as a Programs Specialist. He currently works in Family Programs, providing support to families through programs like Hal Bruno Kids Camp programs, the Sarbanes Scholarship Program, along with providing logistical and operational support to other Family Programs during the Memorial Weekend and throughout the year. Eric has previously served as Fire Chief and has over 30 years of service with the Cashtown Community Fire Department.

About the National Fallen Firefighters Foundation

Congress created the National Fallen Firefighters Foundation to lead a nationwide effort to honor America’s fallen firefighters. Since 1992, the non-profit Foundation has developed and expanded programs that fulfill that mandate. Our mission is to honor and remember America’s fallen fire heroes, provide resources to assist their families in rebuilding their lives, and work within the fire service community to reduce firefighter deaths and injuries. https://www.firehero.org.