The Human Cost of Climate Crisis 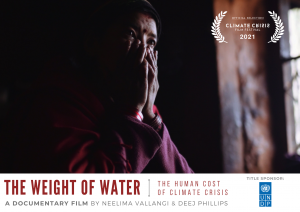 The Weight of Water

The Human Cost of Climate Change 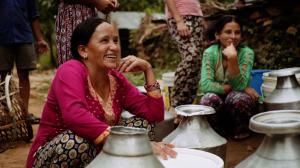 The Zain Jaffer Foundation, using investment as a vehicle for story and voice, will concentrate next on a mind-changing documentary on climate change.

The power of an image can’t be overstated, and when it comes to changing minds and prompting action, it’s incredible what this team can do with less than an hour of an audience’s attention.”

In an urgent and ground-level film project, Indian writer Neelima Vallangi and British filmmaker Deej Phillips bring one of the most personal and piercing investigations of climate change to light. The Zain Jaffer Foundation has selected the film for its most recent investment, supporting the directors and production team in their endeavor to bring the mind-changing film to an audience of change-makers. The film is slated for a global release on the 9th April on DW TV and on their online platforms. DW will release the film in English, Spanish, German and Arabic and they have over 8 million subscribers in these languages on Youtube alone.

‘Entrepreneurs are constantly weighing the question of how they can make things better,’ says Zain Jaffer, founder and principal of the Foundation. ‘But they’re not the only ones who are working for change.’

The Foundation was founded as an extension of Jaffer’s philosophy and long-term commitment to the potential of investment as a positive change agent. Through the power of storytelling, the foundation seeks to support a diverse array of initiatives that amplify the problems still unsolved, empowering the voices that can accelerate global urgency and progress toward climate change, poverty, exploitation, discrimination, and other crucial crises of our time.

The Weight of Water takes its viewers on a close journey through the regions of Nepal, where we meet the people experiencing some of the most direct, tangible, and disastrous consequences of climate change in real-time. The Global Climate Risk Index released in 2020 ranks India 5th, and Nepal 20th, on the list of regions vulnerable to extreme weather events brought on by the changes in climate. The work of Vallangi and Phillips offers an unforgettable testimony that climate change is not a set of scientific predictions and expected timelines; it’s in people’s homes and in their lives.

‘The human side of climate change is harrowing, and it’s happening all around the world,’ says Vallangi, who started this project with a series of conversations conducted in 2019. ‘It’s hard for people to understand what a one or two-inch rise in sea level means, until they see the downstream damage it’s already doing to these communities.’

Water is a theme throughout the documentary, which airs roughly 52 minutes as it prepares for full release. Insight from Nepali climate change experts and activists pair with the cinéma vérité style in which we meet the community, explaining the science behind what’s happening on screen and what could continue to happen in the months and years to come.

The co-director, Deej Phillips, is a talented British documentary filmmaker with eight years of image-making experience. A director-cinematographer, Phillips is known for his ability to capture the kinds of moments that move audiences, and tell important stories in the intimate language of the communities that live them.

‘We have in mind an audience with scientists and experts, but also with members of these same communities who need their stories told,’ shares Phillips, who was compelled to join the project to mobilize his own urgency. ‘We hope it finds audiences all over the world—families and citizens that can understand and amplify the need for change, as well as the policymakers and government officials that can actualize on those demands.’

‘It’s a deep honor to be a part of these projects,’ says Jaffer. ‘The power of an image can’t be overstated, and when it comes to changing minds and prompting action, it’s incredible what this team can do with less than an hour of an audience’s attention.’

About The Zain Jaffer Foundation

The Zain Jaffer Foundation is a non-profit organization that supports and funds a diverse array of initiatives aimed at addressing and solving serious social, economic, and environmental challenges across the world. As parallel crises increase in their urgency after the impact of the pandemic, the foundation operates on the core principle that investment can be used as a vehicle for change-making solutions. Zain Jaffer is an entrepreneur and principal of Zain Ventures, a family office that invests across a variety of asset classes including start-ups, real estate, stocks, fixed income, hedge funds, and private equity.

The Weight of Water Trailer