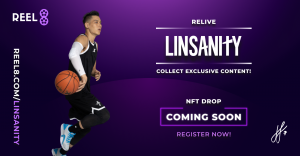 The Linsanity NFT drop features access to a previously-unreleased director’s cut of the documentary and behind-the-scenes footage of the Lin family. Holding a Linsanity NFT on the Reel8 platform will provide fans of the basketball phenom with the opportunity to unlock exclusive metaverse content, including a high-stakes three-point shooting game through which token-holders compete for the chance to meet Lin within a live AMA.

Lin’s philanthropic aspirations took root long before his now-historic NBA debut made him into a household name. After becoming one of the only Asian American NBA players, Lin launched the Jeremy Lin Foundation, which partners with grassroots programs that are deeply embedded in the community to serve low income AAPI and cross-racial youth by addressing the full-range of barriers faced (ranging from food insecurity, parent education, mental health and youth empowerment). Through partnership with Reel8, Lin now aims to close the gap in equity which Asian American filmmakers often face:

“I have personally experienced how difficult it can be to have our stories underrepresented,” Lin said. “I am excited to give fans an opportunity to support their favorite filmmakers while also supporting crucial youth programs for our community.”

Reel8 Co-Founder Dave Liu agrees: “The vast majority of NFTs miss the mark when it comes to providing society meaningful benefits — that’s why we’re excited to launch the Jeremy Lin Linsanity NFT Collection. We believe it will set a new standard by enabling underrepresented filmmakers to reach new and existing fans of their art through direct engagement with members of their audience, while simultaneously supporting social causes like the Jeremy Lin Foundation.”

#3D3sForHope – compete for the chance to meet Jeremy Lin:

Register for the drop at reel8.com/linsanity.

About the Jeremy Lin Foundation

Founded in 2011, the Jeremy Lin Foundation is a non-profit which supports underserved AAPI and cross-racial youth programs through narrative change, community empowerment, and cross-racial solidarity. The Foundation has partnered with over 15 nonprofits across the nation. Currently, the Foundation grantees collectively serve over 22,000 underprivileged youth, 46% of which are AAPI and 54% from other communities of color. Beyond multi-year flexible funding, the Foundation partners with grantees to raise awareness, host events with our Founder, build capacity, and strengthen the network of AAPI service organizations. Lin’s recent initiative, “Be The Light,” donated a total of $1.4 million to COVID relief efforts and helped raise awareness of increasing trends in anti-Asian violence seen during the pandemic.

Linsanity is an award-winning documentary film that chronicles the rise of Asian American basketball player Jeremy Lin. The film highlights the numerous challenges, adversity, and racism he experienced during his breakout role in the National Basketball Association (NBA). The film was a Sundance Film Festival highlight and Asian Media Award Winner at the Asian American International Film Festival.

Reel8 is an innovative web3 platform for underrepresented filmmakers to reach new and existing fans. Reel8 allows fans to collect exclusive behind-the-scenes and directors’ cut of films, access limited fan experiences such as cast and crew Ask Me Anythings sessions, and immersive, gamified metaverse experiences. Reel8 assists under-represented filmmakers with innovative ways to distribute their art through NFTs and fulfills the promise of Web3 and the new world creator economy. Reel8 is contributing 50% of its corporate profits to the Reel8 Community Fund which will be used to financially assist under-represented filmmakers and support Reel8 community projects.