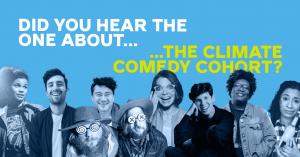 Comedians will learn, create new comedy informed by climate science, and take their work on the road in a series of live shows and short-form video content.

CHARLOTTESVILLE, VA, UNITED STATES, May 16, 2022 /EINPresswire.com/ — What do a group of comedians and a climate scientist have in common? They’re among the latest collaborators to work together to inspire climate action and help save the planet. The Climate Comedy Cohort, launched today with the announcement of its first nine fellowship winners, is a first-of-its-kind network of comedians who will come together to learn, create new comedy informed by the latest climate science, and take their work on the road in a series of live shows, short-form video, and other funny content.

While climate change is no laughing matter, the Cohort will work to leverage humor as a strategy to transform the climate narrative from doom and gloom to: “we’ve got this!”—as well as shift how people see their role in taking action. Generation180 and American University’s GoodLaugh initiative at AU’s Center for Media & Social Impact (CMSI) co-created the fellowship and are directing the innovative program through the end of 2022.

“We need creative approaches to tackle the climate crisis, and bringing humor into the conversation is exactly what America needs right now to help shift hearts and minds,” said Wendy Philleo, Executive Director of Generation180. “We are using comedy and the arts to help popularize clean energy behaviors and spur a widespread shift toward clean energy solutions,” she said.

Research shows that 70% percent of U.S. adults want to take action on climate change, but most don’t know where to start. That’s where comedy can help. The cohort is the latest initiative from Generation180 to change the narrative around climate and clean energy, using humor to educate and inspire individuals to take action in their communities–in their shopping decisions, at the voting booth, and as citizen advocates.

“We know from decades of research–our own and many others’–that comedy is uniquely persuasive, attention-getting, memorable and activating when it comes to communicating about serious social issues, including climate change. This program is designed to put all of those research ideas to work – bringing together some of the most accomplished experts on climate change – researchers, organizational leaders, scientists, journalists – with some of the funniest comedians in the country,” said Caty Borum, Executive Director of CMSI. Borum is also the author of two books about comedy and social justice, including A Comedian and An Activist Walk Into a Bar: The Serious Role of Comedy in Social Justice (co-authored with Lauren Feldman), and The Revolution Will Be Hilarious: Comedy for Social Change and Civic Power (forthcoming in 2023), both of which include climate and environmental justice.

The diverse group of newly-appointed CCC fellows ranges from Tik-Tok stars and accomplished stand-up comedians to writers and producers, all of whom want to amplify climate change solutions or already focus on environmental issues in their creative work and volunteer activities. Fellows were selected from a pool of 118 applicants from 10 states and three countries. The list of nine winners can be found on the Climate Comedy Cohort website.

During the program, comedian fellows will hear from speakers such as Niklas Hagelberg, United Nations; Dyanna Jaye, Co-founder of The Sunrise Movement; Reyhaneh Maktoufi, climate communications scientist as well as clean energy and electric vehicle experts. The fellowship will be led by a group of comedy writers and performers who have worked with The Tonight Show, TruTv, VICELAND, Comedy Central, Spotify Original Podcast, and others.

“It’s an exciting challenge to bring levity to something people often don’t want to talk about, but is so so important,” said Bethany Hall, Creative Director of CMSI’s Comedy Initiatives and Cohort artistic Co-director. “When comedians learn something new and apply their unique lens on social problems as complex as this one, they are enormously effective at helping audiences see things differently,” she said.

“This project is about injecting hope and optimism and positive engagement into the dialogue about climate, not satirical punches at climate denialism or scary messages,” said Esteban Gast, Generation180’s Comedian-in-Residence, who co-leads artistic direction of the Cohort with Hall. “We want to tell audiences: When it comes to climate, we are all in this together, and there are constructive things we can do that make a big difference,” he said.

This October, participating stand-up comedians will perform at a series of live shows along with celebrity comedian headliners. Other fellows will release new videos and other content created during the cohort.

To receive dispatches from comedians about their journey through the program and get notified when new content is ready for prime time, please visit the cohort website.

Generation180 is a national nonprofit working to inspire and equip people to take action on clean energy. We are working to bring about a widespread cultural shift in how people get their energy, focusing on high-impact climate solutions like solar and electric vehicles. The climate comedy cohort is the newest initiative from Generation180 to use humor and creative communications to educate and inspire individuals to take action in their communities, with their shopping decisions, and at the voting booth. This includes our popular Flip The Script newsletter, original illustrations, and podcast Comedians Conquering Climate Change.

GoodLaugh is a comedy production engine and knowledge lab that brings together the most talented minds in comedy, social justice, entertainment, and philanthropy to collaborate and create comedy and research to help repair the world and build a more just, equitable future. As a program of the Center for Media & Social Impact (CMSI) at American University, GoodLaugh facilitates comedy production, studies, and convenings with social justice at the core. By making new comedy, distributing new knowledge and understanding, and bringing together unlikely players to leverage humor for social good, GoodLaugh believes that “laughing in the face of injustice” can solve, well, almost anything.

About the Center for Media & Social Impact

The Center for Media & Social Impact (CMSI), based at American University’s School of Communication, is a creative innovation lab and research center that creates, studies, and showcases media for equity, social change, and social justice.

Marking Two Years Since the Military Coup in Burma